The great thing about being a writer is we know enough about a subject for laypeople to think we are know-it-alls and just little enough for experts to think we are idiots.

Some think about the wonders of science when it comes to exploring space. All I can think of are the headaches. The body degenerates in low gravity after a while. It’s why you always see astronauts on treadmills when they are on a space station. It isn’t because they love being bungied down on a treadmill so they can generate enough electricity to keep life support turned on for a few extra minutes.

I presume not. The reason is that the body falls apart, bones weaken, blood pressure gets weird, etc. Space is, quite frankly, unhealthy.

So how do you get humans to live in space for prolonged periods of time? How can you keep a human healthy in an environment that is always trying to kill them? Even worse, how can you keep generations of humans growing and thriving in an ecosphere that serves perfectly to encourage the growth of bugger all?

If you have the answer, please write it down, stick it in an envelope, and mail it to yourself. You’ll want proof that you cracked the problem later on.

SPACE, THE FINAL NOTHING

What this means is scarcity. A lot of it. You can’t raise corn in space – the lack of gravity gets things all weird. Much like humans, you can’t just uproot something that evolved on Earth and stick it somewhere not at all Earth-y and expect there to be no problems.

Let’s take Mars for an instance. Whenever we go to Mars, we’re going to have to take double of everything with us. We’ll need to take food on the journey there and the journey back. Same for fuel, oxygen, any other supplies we can think of. Oh, and we’ll also probably have to take enough parts to build another ship because I am assuming there are no AutoZones on Mars. Whenever something craps out (and something WILL crap out), we’ll need to do whatever repairs we can by ourselves with whatever supplies they have on hand.

These are just a few issues with a “there-and-back-again” trip. This isn’t even considering the issues with colonization or setting up campuses on the planet. Combine an extremely hostile environment with cosmic rays, a neighboring asteroid belt, and a magnetosphere that is a few shades stronger than the field coming off of a discount Bluetooth speaker, and you have history’s most expensive way to kill someone. It takes time to build a habitat and the second you land on Mars the clock is ticking.

Things get worse the further out you go. The moons of the gas planets and ice giants are for the most part inconceivably barren. We were not grown to travel in space for long distances, much less live there. Then the sunlight gets so weak that you can’t easily depend on solar power to take care of all of your energy needs.

Which is why I think we should do it.

I believe that with good luck and a strong tailwind, we can make it. I think at this point, space exploration and settlement is the next phase if humanity is to avoid withering on the vine.

Approaching it with this “maybe can’t do but should anyway” mindset forced me to come up with some possible solutions to problems that don’t exist.

One thing I imagined in The Conqueror’s Witch is that everyone lives underground. You want insulation against a constant bombardment of cosmic and solar radiation? The ground is a cost-effective insulator that you don’t need to bring with you.

There are ports in and out of the various campuses, but exposure to the surface has to be minimal.

A huge problem is food. There isn’t any. Same with air. It turns out there is an abundance of water out there, but not potable. So you need to purify the water.

You cannot grow your normal staple crops in space. What you can do is grow lichen, moss, yeast, and mushrooms. In low-to-zero g, you can also grow protein crystals. You can also grow lab meat. So the fare is not anywhere approaching delicious. But it is nutritious.

The result of this diet? In this story, colonists are pretty short. They range from 4’9″ to 5’4″. Someone like Wilhelm is a domineering and forceful personality at 5’8″. None of this applies to the story because no one meets with an Earthling.

Their shortness is partially nutritional, partially environmental/genetic. It is beneficial since oddly enough space is at a premium. There is a huge cost to creating even the smallest campus, and the more space you can save the better. What we would consider being “short people” would actually fare better in space than larger people. At 6′ tall, I would be seen as freakishly tall and unsuitable to live on a campus.

Purifying water is an easy matter. And this far into the future (around 200+ years), I imagine that recycling has become very efficient. You can never get 100% of the energy you invest into a system back, but when it comes to re-purposing waste, they come pretty damn close.

In any case, in my story I assumed that it took up to half a year before a campus could become self-sustaining. Until that moment, they were highly dependent on the kindness of their neighbors.

There are a number of other solutions I came up with, but I that would result in an over-long post containing information only to me.

In other words, very much like my other posts!

WHAT I DONE DID

When I started writing this short story, I had two ideas:

So since I was making a hard sci-fi story, I went with the Aleister Crowley Thoth Tarot deck because of course I did.

I did a ten card spread, roughly conforming to the Celtic Cross spread, with only slight nods towards predicting the future. I was more interested in predicting the present. The cards determined not only the linear development of the plot but also the characterization and feel for the action.

But it turned out ten cards were not quite enough. They set the story up for the end, so I drew a final eleventh card to summarize the whole draw.

Whether or not this was successful in this rough draft is up to you.

Here are how the cards fell, and what those cards mean. 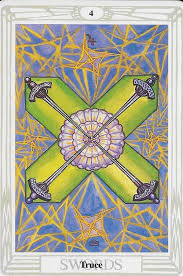 The Four of Swords says that the mind has settled a problem, come to a decision, or found a compromise. However, it also indicates the possibility of stagnation, and therefore any truce found in this card should be used for reflection and deep consideration because the reverse of this card is a cold truce with no peace at all and eventual isolation.

2. THE QUEEN OF WANDS 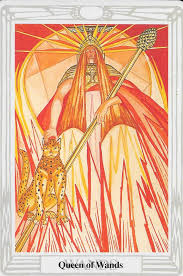 The Queen of Wands is the personification of fire. She is the mother of her element, bright and emotional, containing great love, understanding, and empathy. She creates trust and warmth and exudes pride, inspiration, independence, strength, and charisma. She is a great motivator, but she is also intolerant, jealous, and at times reckless. 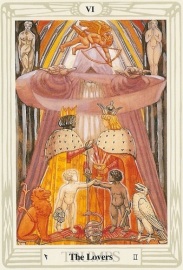 The Lovers is a complicated deck. It represents devotion, love, and full-throated confession. It can also represent a decision and leaving an old way of life. The Lovers doesn’t necessarily refer to people. It can also be a love for a mission, or a strong desire, or a hidden wish. However, like how everything else contains its opposite, the Lovers can destroy rationalism or signal repression of your own instinct.

4. THE SEVEN OF SWORDS – FUTILITY 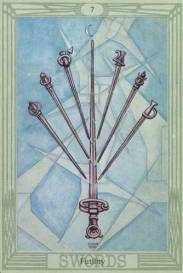 The Seven of Swords is an ill-favored card, as are all of the sevens in the Thoth deck. However, the Seven of Swords indicates a willingness to accept fate and use every trick to get out of their problem. The Swords signify intellect, so this card indicates an intellectual solution to the problem. So this card indicates trickery and cleverness as a way of escaping fate. Think of Ulysses when contemplating this card. It also indicates a lack of morality in the solution.

5. THE SIX OF SWORDS – SCIENCE 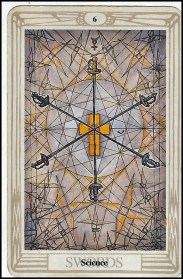 Here we are in the “smart cards” again! The Six of Swords indicates any deep thought, as well as research and success after a deep anxiety. But it also indicates too much rationality and distrust. 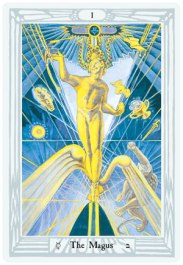 The Magus is an agent of creation, action, and consciousness. This is a card that makes an idea come true. The Magus is aware of their power and has the energy to get their way. However, the card is also a raving egotist, whose thought is ever turned inwards. The card could also indicate feeling their energy but not being able to do anything about it. So The Magus could be brilliant, powerful, energetic, yet trapped.

7. THE FIVE OF CUPS – DISAPPOINTMENT 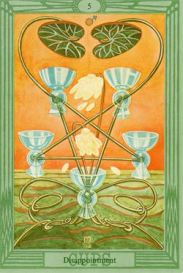 The Five of Cups is an emotional crisis. It could represent a fear coming true, feeling unfulfilled and empty, or watching a plan unravel. The card represents the loss of an illusion or knowing one is deceived and finding that they have to start over. It can be sobering, this realization, and painful. There is bitterness, treachery, deceit in this card. But it also represents the ability to finally see through an illusion and begin again. 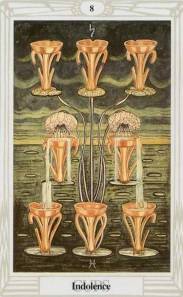 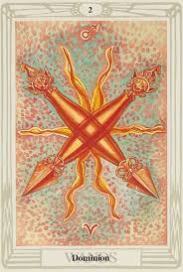 Wands are power, and the Two of Wands indicates strength and recklessness, which can be fantastic when guided. It indicates the will to conquer and bottomless determination. This is a creative card in its most exuberant form, yet when uncontrolled could lead to destruction, revenge, and brazen recklessness. 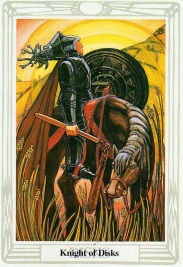 The Lord of the wild and fertile land, ladies and gents! The Knight of Disks is reliable, patient, and very clever when it comes to material matters. He is a hard worker and focused on his tasks, possibly to the exclusion of all else. His favorable results are not from his intellect. They are from his perfectly honed instinct and pragmatism. But the Knight of Disks can disdain intelligence and become oafish. He can be self-centered, intolerant, and incapable of thinking of anyone but himself. And at his darkest core, the Knight of Disks can be cowardly and unwilling to change anything about himself. 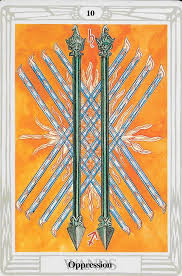 The Ten of Wands is pure fire turned into a blind and brutal force. It has lost track of its goals and like a runaway fire that is only interested in whatever it can consume. It is a power that is handled with stubbornness instead of control. It represents an overbearing force, cruelty, selfish goals, and aggression. But it also indicates blocked will or being thwarted. the Ten of Wands is the Lord of oppression, and in the last position in a draw, it is an indication that the person should no longer waste their time on a conflict they cannot win.

In all, I enjoyed my experiment and I hope you did too. It was perhaps self-indulgent, but what writing isn’t? Usually, I am a big believer in outlines and plotting things out. It was interesting to let some random element decide how the story was going to progress. I encourage you to do the same – let some randomness determine how your story progresses.