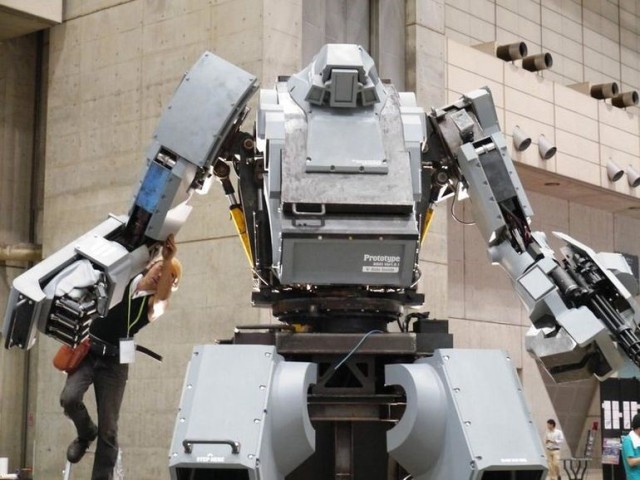 The future is inevitable. Don’t believe me? Wait five seconds.

Welcome to the future! How different things were five seconds ago! What a wild trip, huh? And what has changed over the last few seconds? Not very much.

Except we are now over five seconds closer to the development of Giant Death Robots!

A feverish dream made up of equal parts delirium and awesome? Yes, of course. But so many other inventions start up that way. Sham-WOW, microwaves, the airplane… all of those items that we cannot live without started in the often opium-soaked nightmares of the ridiculously educated. Giant Death Robots: brother to the dreams of madmen past!

My company, AT&T, is partnered with McDonnell Douglas, BAE Systems, and Hasbro to create a fleet of corporate-owned Giant Death Robots, coming to a gathering of five or more leftists near you!

“Why have Giant Death Robots,” You may ask. WHY?! “How could we have gone so long without them?” I ask back! For too long we have had to turn over late payments to collection agencies. The problem with collection agencies is that they have no personal touch. They are cold and distant. Giant Death Robots are cold and extremely close. Even though they can, if they must, launch an RBS15 MK3 surface-to-surface “Automated Bill Pay” missile from up to forty miles away. And of course they must.

You don’t think we’d build missiles into our Giant Death Robots and not use them, do you?

Even better! The act of being blown up by our missiles constitutes a legal agreement saying that the survivors or next-of-kin will pay for the missile used to blow up the debtor. Everyone who matters wins!

Just when you thought the strokes of genius were making us smell toast, get this!

We are defraying the cost of construction via product placements on the chassis of each Giant Death Robot, meaning that the next ur-hippie who wants to protest eating fur or whatever they believe in can look forward to looking down the barrel of a GAU-8 Avenger Gatling gun with a Jimmy John’s logo stamped on the side.

Now my pinheads in marketing say that “Giant Death Robots” is perhaps a consumer-unfriendly term. Perhaps, they say, after a good deal of market research and consultation with focus groups we can come up with a name that kind of couches the true purpose of the design.

I personally refuse to sanction calling the most advanced mechanized killing machine in all of human history the “Fluffy Bunny Hug-O-Tron.” I say screw marketing! Full steam ahead! With a fleet of Giant Death Robots, who’s going to tell me what to name what my expensive team of kidnapped German and Bulgarian scientists have cooked up for me? Ooops I mean “us.”

Although some nervous nellies might say that weaponry is better off in the hands of the military, we (I) think that arming corporations is the American way! It is the wave of the future!

For instance, it’s an open secret that Comcast is trying to develop a portable Gauss rifle to go out with every repair vehicle. Nestlé is working on a microwave bomb that will dry up all of the water in a ten kilometer radius so they can move in and become the ONLY source of water in the entire region! Think of the profits!

This is something that we are only beginning to monetize: human suffering. A corps of Giant Death Robots will go a long way to opening an endless revenue stream. Today, people are suffering for free! No charge at all! It’s about time to knock these miserable people off the teat and make them pay for their wallowing.

Me and my corps of Giant Death Robots are more than willing to take up the slack. Look for us at a bill collection source near you!

For God’s sake, don’t run! They are programmed to be sexually excited by fear and their sensors track fast movement!

About the Author: M.D. Ambersaurius is better than you. His career has spanned lifetimes and the breadth of his knowledge cannot be measured in any metric that a puny you can understand. Read his LinkedIn and tremble.

The LinkedIn of M.D. Ambersaurius