In “If You Can’t Say Something Nice,” I take a work of “art” that is widely (and justifiably) scorned and try to see the bright side of things. 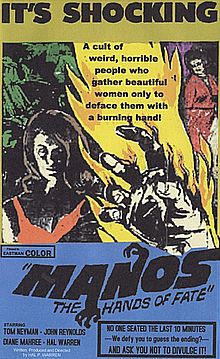 Ah, “Manos.” Possibly the platonic* ideal of a bad movie. “Plan 9 From Outer Space” was long regarded as the worst movie ever made and it isn’t even close to that. “Plan 9” has a charming lack of cynicism to it. It is exactly itself, with no hint of an apology.

On the other hand, stop the lazy judging and read this synopsis:

A loving family on their first vacation together makes a wrong turn on a road and ends up the pocket dimension of a murderous sex cult led by an immortal religious fanatic who unfailingly believes in two things: bigamy and sadism.

The family tries to escape but discover that all roads lead back to the same dilapidated horror ranch where even now the religious leader’s sexy, scantily-clad “wives” are searching for them. Their only ally? A demonic figure, ostensibly the servant of the religious leader, but with his own agenda formed from decades (if not centuries) of abusive servitude. His agenda? Take the wife for his own, and who cares what happens to the man and their child? And where is God? There is no God but Manos, and The Master is his prophet.

Compared to fare like “Plan 9,” there is a patina of cynicism all “Manos”. The story its creation is well-known. Local manure magnate makes a bet at a bar with a traveling industry insider: “I bet I can make a successful horror film for under $20,000”. Then, the reality sets in: the litany of shortcuts, extraordinarily poor dubbing, atrocious plotting, ridiculous performances, abominable directing… the adjectives pile up.

Hal Warren really whizzed it down his leg. After a disastrous local premiere in El Paso, he faded into the zeitgeist darkness, a brown dwarf too dim and puny to ever realistically become a star, only to later explode thanks to “Mystery Science Theater 3000.”

Like they said in MST3000, every frame of the movie looks like someone’s last known photograph. The camera they used was a wind-up, so shots couldn’t last more than 30 seconds. Most of that camera time is wasted in long pauses where the actors seem to forget what they’re about to say.

The wind-up cameras couldn’t record sound, so every stitch of dialogue was overdubbed. And because Hal Warren wanted to do things on the cheap, only three people did the whole of the ADR, including Warren himself, all of them doing a variety of faked voices to cover up this fact.

The “wives” were hired from a local modeling agency. Let’s restate that to give proper perspective: they were hired from a local El Paso modeling agency. The thing is that although Warren wanted the wives to be “sexy,” the models’ manager insisted on their being clothed as much as possible. Hence, their diaphanous gowns brazenly displaying some industrial-grade underwear and one-piece bathing suits underneath.

Scenes and characters go nowhere. What’s the point of the couple making out in a car in what appears to be a nuclear testing range? None, except that the woman was meant to be the leading lady but broke her leg before shooting. So her scenes were a bone Hal Warren threw to her so she could claim acting in a film on her resume.

I’m betting she removed it off of her resume after the premiere.

But Is It All THAT Bad?

The heartbreak of “Manos: The Hands of Fate” is that in better hands this could have been a compelling movie. Let’s look at it under a different light. Re-read the plot synopsis above.

It’s a pretty awesome story! I would pay to see it.

Hal Warren paid to make it, and it is undisputedly his baby. He’s the star, the director, the producer, and the writer of the screenplay. He held the purse strings, and his is one of the only three voices that overdubbed everyone’s lines in the movie.

But, absolute amateur that he was, he made it! He actually made a movie within his budget. Sure, it’s crappy, but damn if he didn’t see his dream through to the very bitter end.

And what an end! A cast suicide (poor Torgo, we hardly knew ye); a weeping child in the theater at the premiere discovering the heartbreak of ADR; a hopeful El Paso audience, excited that an auteur lived among them only to realize that his movie was terrible; even an ultra-cheap premiere where Hal Warren paid for only one limo and had it circle the block to pick up various cast and crew to give the illusion of fanciness.

That seems to have been Hal Warren to the nth degree.

In classic Hollywood shorts, when a band of plucky amateurs get together and yell “let’s put on a show”, the results are charmingly haphazard triumph of corny fun.

But let’s be fair. He accomplished what he set out to do, and now the movie is justifiably famous. It was a long, slow investment, but if Warren still held the rights to the movie he would be a multimillionaire.

Making an infamously bad movie is a lot harder than making a bad movie. You have to hit crap target dead center. He did! Other studios keep trying (Asylum studios, creators of “Sharknado,” for instance) but because they’re intentionally trying to make crap, they’re getting the notes but not the music.

Warren got it by completely not intending to do so. There isn’t a stitch of bad comedy in the whole movie, which makes it eminently re-watchable. Failed drama makes for great comedy, just like failed comedy makes a movie excruciating.

Is this movie the equivalent of “here, taste this… it’s disgusting?” Hell, no! Watch it. It’s vastly entertaining for the exact reasons Warren never intended.

So credit where it’s due! Warren made the dream happen; the cast made their way through the film with only one suicide in the aftermath; and the story, when stripped of the medium and method, is really pretty cool.

If someone remade a straight version of Manos, done competently by professional actors, a professional crew, and a very patient script doctor, I think the film could be a classic of horror cinema.

And in the main, it really is watchable. Probably not alone. I can imagine that watching it alone would inspire depression in the most resolute optimist. It’s best viewed in a crowd of people, preferably with one who had never heard of the film. Their reaction would be one of the best parts of the experience.

How many of us have had a dream, only to write it off as a bad idea? He had the gumption to make a movie despite all sense, common or otherwise. But it is far more memorable and entertaining than nearly all of the terrible horror movies of the 1960s. Way to go, Hal!

Buy it at Amazon!

* Remember when I asked if editing was important? Careful proofreading is too. I originally wrote “platonian” for “platonic,” which firmly plants me in the catagory of “dorkasaur.”